OISTAT Forum: The Next 50 Years 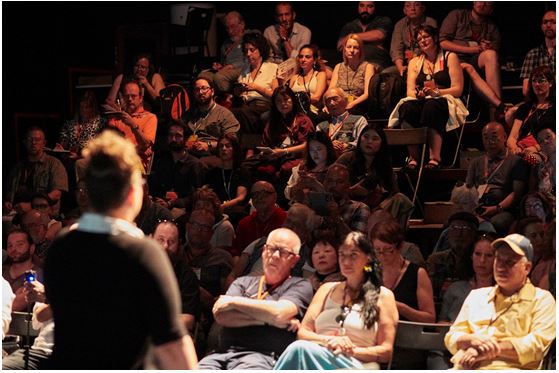 On June 13, OISTAT Forum: The Next 50 Years was held in Prague, Czech Republic. Over 100 people around the world attended the forum to share their opinions on the development of the organization. People gave many constructive advices regarding the future direction of the organization, such as OISTAT should be more project-based, make young people feel the passion that the current OISTAT people have and also moving towards cross-commissions collaborations. Photos.

Voting on the Statutes Changes was held at the Small Congress in the OISTAT Forum. The Statutes Changes won the majority votes. The change in the Statutes is on the maximum number of terms that a person can serve as President, EC-member and/or Chair of a (Sub-)commission, or in a combination of those. The reduction in the number of elected terms enables a healthier flow of leadership within the organization. To see the latest version of Statutes, click here

New Leadership at Commissions and Sub-Commissions

“Fiesta: Meeting OISTAT” is organized by OISTAT Spain, The Theatres of Latin America and OISTAT. It is a session open to all the participants during PQ. OISTAT members from Brazil, Spain and Chile shared their experiences of OISTAT. A wonderful opportunity for everyone to meet OISTAT people and find out how to be involved with OISTAT. Photos.

OISTAT and Ministry of Culture, Taiwan Signed the Agreement to Keep HQ in Taiwan till 2025

On May 28, President Bert Determann and Deputy Minister of Culture Taiwan (MOC), Hsiao Tsung-huang signed a new agreement to keep OISTAT Headquarters in Taipei, Taiwan until 2025. Over 50 prominent Taiwanese theatre professionals and distinguished guests from the cultural sector attended the signing ceremony to support OISTAT and to celebrate the close collaboration between OISTAT and MOC ever since the Headquarters moved to Taipei in 2006. The cooperation between OISTAT and Taiwan’s Ministry of Culture ensures the work of the Headquarters for the global theatre community can continue for the coming 6 years.

On Thursday June 13, lighting designer Henk van der Geest passed away in his hometown Amsterdam. Henk served an enormously important role for OISTAT and also an inspiration to a lot of people. He will be truly missed.

It is with great grief that Sjef Tilly passed away on August 12. Sjef has been involved with OISTAT for many years, especially in the Education Commission. Sjef will be dearly missed

ETTE published the handbook of basic safety for the theatre and event industry. In contrast to other safety courses, this book is not focused on legislation, but on competence, on mastering a safe working practice. ETTE Project

Entry for New Scholars Essay of The Society for Theatre Research is opened.